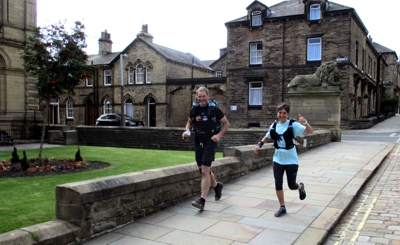 Runners are gearing up to take part in the Dales High Way Ultra marathon next week.

The race covers the whole 90-mile Dales High Way - a route described as "stunningly brutal" by one runner after a recce of the route for the organisers last July.

Runners have up to 36 hours to complete the race, with an optional additional 10-mile loop up to High Cup Nick at the end, for those wanting to push the limit to 100 miles.

The race was initially planned for last May, but had to be cancelled due to the Covid-19 pandemic.

Due to current restrictions, all checkpoints will be outdoors, and only 21 runners are expected to participate. They will leave Saltaire on Saturday morning, May 8th on a staggered start from 6 a.m. onwards.

The race is organised by Punk Panther Ultra Marathons UK, led by Ryk and Bev Downes. The races are professionally organised, with established checkpoints along the route and qualified medical support. Each runner also carries a tracker so that their progress and position can be followed throughout.

Competitors can gain 5 or 6 points towards qualification to the prestigious Ultra Trail du Mont Blanc (UTMB). The UTMB race involves around 106 miles (170km) of running and a circumnavigation of Mont Blanc, the highest mountain in Western Europe.

Members of the Friends of a Dales High Way will be running the race checkpoint at Settle on Saturday afternoon.

See our previous posting here, and follow the race live on Track-Trail here. 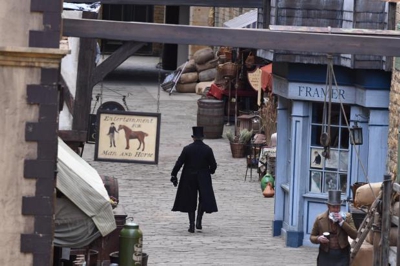 Saltaire, at the start of A Dales High Way, once more became a film set as a section of the mill was made over into a busy street scene.

Work on the set continued for several weeks, building shop fronts, including a pub, a tailors and a chemists.

Filming took place over two days this week, with parking in lower Saltaire suspended for the duration. A huge white crane, with Warner Brothers set lighting and rigging written on it, was also at the filming location.

The new second season of the BBC/HBO drama, created by Sally Wainwright, covers the further adventures of 19th century landowner Anne Lister, played by Suranne Jones. Timothy West is amongst actors in the new series.

Other scenes were filmed nearby at Haworth Moor's Penistone Country Park in February. 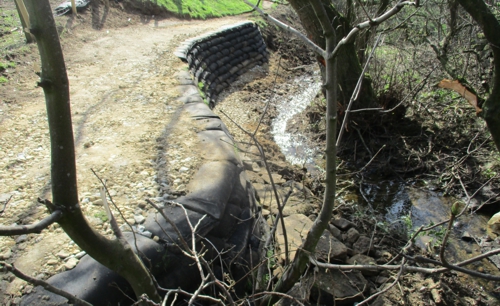 A recently repaired section of path alongside Glovershaw Beck, near the start of A Dales High Way, has been improved further.

The path was originally repaired with an innovative "green revetment" last August, after floods had washed away a section of banking.

But further flash flooding over the winter had caused a partial collapse of the new banking. The original contractors returned to fix the problem, and over two days re-engineered and extended the revetment with a more contoured face.

The beck floor has also been cleared.

It is hoped the new look revetment will better carry the surge of flood water when it returns. The repair has come just as walkers begin to return for the new season.

View from the Riverbank 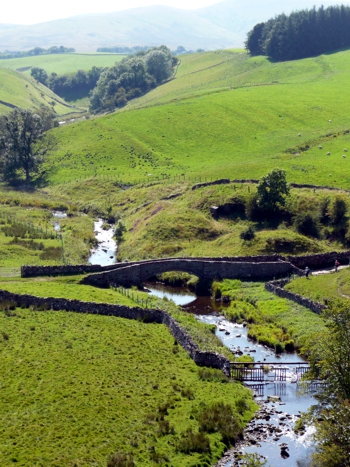 Three presentations on different environmental projects in the Eden Valley are on offer to all this spring, hosted by EDEN Rivers Trust (ERT).

Natural flood management in the Pennines follows on Thursday 22 April, with Dr. Jenny Garbe, the Trust's Natural Flood Management Project Manager, on covering leaky dams, tree and hedge planting, and how they all contribute to reducing the risk of flooding to Eden’s Communities at Risk.

Finally Ditching the invasive species in Trout Beck and beyond on Thursday 20 May, with Dr. Jenny Garbe, Trout Beck Project Manager and Jenni Payne, Volunteer Coordinator, who will talk about their battle against one of Eden’s most prolific alien invaders – Himalayan balsam.

The projects cover the Upper Eden valley, where A Dales High Way enters its final stage, finishing at Appleby-in-Westmorland. This part of the Westmorland Dales became part of the Yorkshire Dales National Park in August 2016.

Each 30-minute talk will be followed by a Q&A session where you can ask your burning questions. Joining in is easy, though you will need to register in advance to book your place. Once you have registered, you will be sent a confirmation email with the details of how to log in. 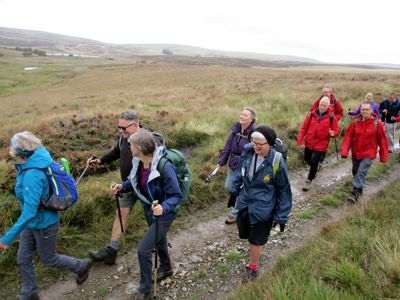 Walkers planning to tackle A Dales High Way this summer can begin planning in earnest, with the new government roadmap offering a potential timeline for the easing of current restrictions.

The 4-part roadmap suggests that by 17 May hotels, B&Bs and hostels can re-open, and by as early as 12 April walking holidays will be possible for those hiring holiday cottages or camping.

All the proposed dates are given as the earliest for each step change, subject to the success of the ongoing vaccination program and the continued reduction in the infection rate.

Travel restrictions remain in the initial stage, with some restrictions lifted on 8 March. By 29 March the "Stay at Home" rule ends, but the advice to only travel locally remains in force.

Step 2, on 12 April, expect an easing of travel restrictions, with non-essential retail opening and pubs, restaurants and cafes able to offer outdoor service. Self contained accommodation - holiday cottages and some camping facilities, will become available.

Step 3, on 17 May, sees outdoor events and entertainment open, with outdoor gatherings of up to 30 people allowed. Hotels, B&Bs and hostels reopen with pubs, cafes and restaurants able to offer table service indoors.

By 21 June, Step 4, all restrictions are expected to be lifted.

Social distancing and Covid-19  hygiene rules will continue throughout. 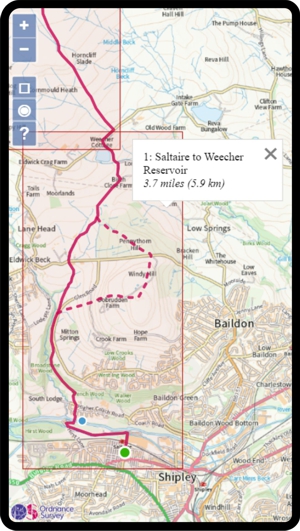 Some new online map tools have been developed to help those planning to walk A Dales High Way.

The new map features have been developed by Skyware Press, who publish the Dales High Way Route Guide and Companion, and are free to use on this website.

Tony Grogan, co-author of the books and a director of Skyware, said: "We have been offering an online map of the route for some time, which allows people to zoom in and pan around and explore the route in detail. But, taking advantage of the current lockdown restrictions, we have spent some time adding new features, which we hope will help those planning and walking the route in the future."

"There is a new feature which shows the Skyware strip-map coverage, as shown in the Route Guide, allowing the coverage to be seen in a wider context.

"There is also an new Geolocation Tracking feature, which is aimed at users of mobile devices like modern smartphones, which are GPS enabled. This allows you to track your position relative to the route, and hopefully will help reassure walkers when needed."

There are a couple of caveats: the geolocation tracking feature uses mapping which requires a good strong signal to download - which may be sometimes unavailable along the trail, especially in more remote locations. This feature also tends to drain battery charge quicker when in constant use, so should be used sparingly.

"These are still in early development, so we'd very much appreciate any feedback. Email us at "friends (at) daleshighway (dot) org (dot) uk and let us know what you think" said Tony.

These tools should only be used as an aid; walkers on the route should use the Route Guide or map and a compass for primary navigation. 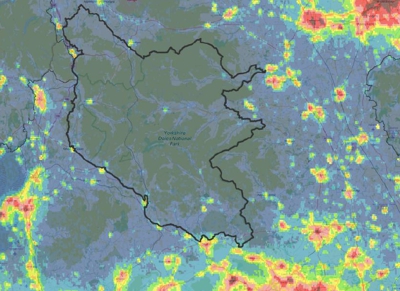 There were some very surprising results from visitor surveys in the Yorkshire Dales National Park through the Covid-19 pandemic last year.

The surprising stats were laid out by Kathryn Beardmore, director of Park Services, at the virtual meeting of the Park's Management Plan Annual Forum, which was held on 20 January.

Typically, only 44% of visitors are under 55 years old, but last year this shot up to 70%. For many this was their first visit to the Park, including a third of visitors to Malham and a half of visitors to Aysgarth.

Walking was one of the chief attractions, with as many visiting Malham Cove in between July and October as any other year, and more walkers climbing Pen-y-ghent in this period than previous years. Over 80% reported being "extremely satisfied" with their visit, despite many facilities being closed.

Pre-Covid tourism figures showed a steady increase between 2015 and 2019, with a 30% increase in staying visitors in the summer months (April to September), and a very welcome 40% increase in the winter months (October to March). Undoubtedly the award of International Dark Sky Reserve status for the National Park last December can only help. 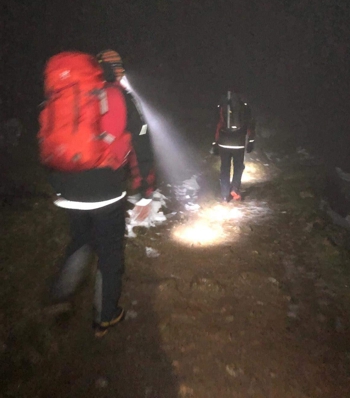 Concerns that people are ignoring Covid-19 restrictions to visit the Yorkshire Dales were highlighted this weekend when two walkers had to be rescued from the summit of Ingleborough.

Volunteers from the Cave Rescue Organisation (CRO) based in Clapham were called out by North Yorkshire Police at 4.30 pm on Sunday, after a couple of walkers had lost their way on the summit due to low lying fog, ice and snow.

The CRO noted that the couple, who had driven up from Rochdale, had set off at 1 pm, wearing lightweight jackets and smooth-soled footwear as well as using Google Maps for navigation.

Superintendent Mike Walker said: “This couple were incredibly fortunate to have come through this experience without injury and be able to tell the tale. We very clearly advised members of the public this weekend to stay at home and when taking exercise, stay local to stop the spread of Covid.

"Quite simply driving miles and miles, out of your village, town or city to visit an open space is not a necessary journey and is not acceptable. Neither is arriving at a challenging walking location, inexperienced and unprepared in treacherous weather conditions.

"By making an irresponsible and ill-informed decision, the safety of others such as the Cave Rescue Organisation volunteers is also put in jeopardy and if any injury resulted, pressure upon already stretched NHS resources."

On the same day another walker was rescued from the hillside below Blua Crags, above Settle, after she slipped on steep, frozen ground, sustaining a suspected ankle fracture. 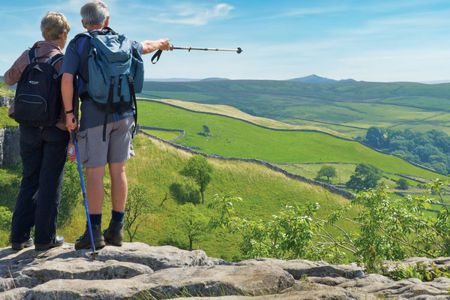 After a year to forget, at last there's hope that 2021 will be different. Today the new Oxford-AstraZeneca vaccine begins being administered to people across the country.

The government intends that over 20 million of the most at-risk citizens will have been vaccinated by April. With their current record of delivering on plans though, that seems optimistic. But by early summer we should be able to return to long-distance walking, even walking holidays - as we did briefly in the late summer of 2020.

It comes at a time when second wave infections and hospitalisations due to the new Covid-19 strain are passing the peak of the first deadly wave last April. But hopefully this will begin to be reversed as the vaccine is rolled out in numbers.

At the moment, only local people are eligible to go out walking along sections of A Dales High Way. North Yorkshire now falls within tier 3, Cumbria falls within tier 4. In these tiers you should avoid travel outside your local area. These restrictions look likely to be tightened, at least in the short term.

But now is the time to be optimistic and start planning for the summer, when hopefully once again we can set off across the glorious high country of the Yorkshire Dales and Eden valley.

View from the Riverbank