Waymarking of the route of A Dales High Way began in April 2012 and was completed in the summer of 2013.

Waymarking is intended to aid route finding for walkers following A Dales High Way and to help promote the route. However, walkers will not be able to follow the route by using waymarks alone - a good guidebook and map are essential.

Walkers should certainly not expect to see a waymark on every stile and gate along the way. In the main waymarks will be placed on posts where the route leaves metalled roads and major junctions, and at other places to help avoid confusion. There will be no waymarking across the high fells - you will have to rely on your navigation skills here.

Shortly after we published A Dales High Way Companion in 2009, we set our minds to exploring the possibility of waymarking the route.

Both Bradford and North Yorkshire were quick to offer their full support to the idea of waymarking the route (indeed, Bradford Council proposed to Ordnance Survey that the route be included as a Long Distance Recreational Path on future OS maps - a move agreed by OS subject to the approval of all four authorities).

The Yorkshire Dales National Park were, however, more cautious and asked us to produce a detailed "business plan" for the route.

This we did and in January 2010 published A Dales High Way Development Plan.

We weren't the only ones looking to waymark a route through the National Park - "A Pennine Journey" was published in 2010 and its authors were also pressing the Park Authority.

So officers at the National Park Authority set about drawing up a policy for such matters. The policy document Long Distance routes; recognition and promotion was formally approved by the Park Authority in October 2010. Cumbria County Council adopted the same policy.

The policy laid out a set of criteria against which the merits of a new route could be judged. A Dales High Way met all but one:

"Permanence - Routes must be expected to last (i.e. to be actively inspected and promoted) for a minimum of 5 years. Routes which have been in existence for less than five years would only be waymarked in exceptional circumstances."

We continued to monitor the route's use and as the end of our 5-year probation period approached, we prepared an update to our development plan setting out a proposed timetable for waymarking. We also got approval from all four authorities on the design for the waymarks which would be consistent along the route. This involves a standard waymark design with central window to carry the Dales High Way waymark logo.

Waymarking the route finally began in April 2012 with the erection of a sign by Bradford Council at the entrance to the car park on Victoria Road, Saltaire, marking the start of the route. Waymarking was completed in the summer of 2013 with the final waymark being installed by rangers of the Yorkshire Dales National Park Authority.

In March 2014 the route of A Dales High Way was included on OS maps.

In the meantime, with the help of Friends of A Dales High Way, we continue to support, promote, improve and help maintain the route.

If you have any comments on the Development Plan, please get in touch by email. 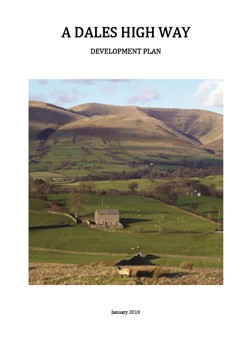 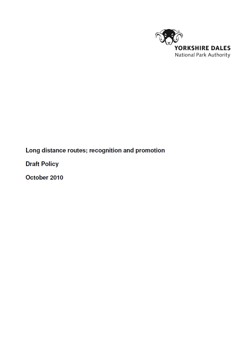